A common assumption in most resting state fMRI (rsfMRI) studies is temporal stationarity. However, recent work has shown that rsfMRI connectivity patterns change considerably across short periods of time, even within the length of a typical rest scan. Little is known about this phenomenon (see Hutchinson et al. 2013 for an in-depth review of this topic). For example, we don't know yet what is the most appropriate temporal scale to investigate this phenomenon. We also don't know if all connections have similar or different levels of variability. Moreover, the potential relationship between fMRI connectivity changes and ongoing cognition is not yet fully understood. Several projects at the SFIM focus on characterizing and understanding BOLD connectivity dynamics both during undirected rest and task. 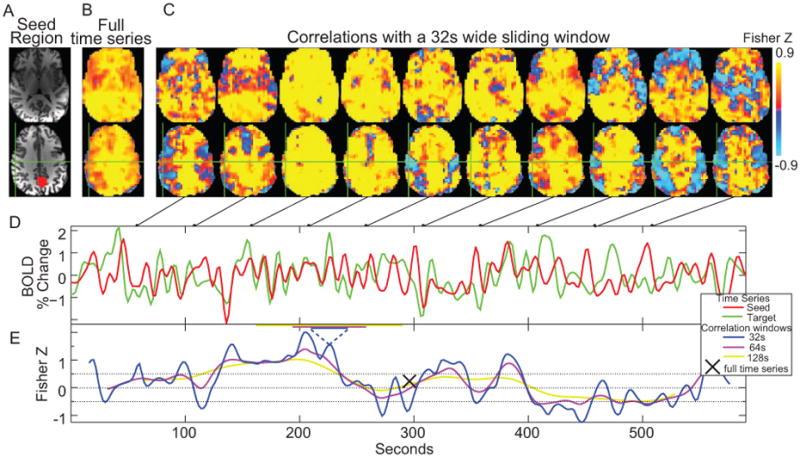 In one of our first connectivity dynamics projects, we examined changes in brain correlations to the posterior cingulate cortex (PCC) across a 10-minute scan. Using that data, we showed how fMRI correlations fluctuate over time, and that these fluctuations can be periodic. While the precise frequencies of correlation fluctuations vary across subjects and runs, it is still possible to parse brain regions and combinations of brain regions based on fluctuation frequency differences. To evaluate the potential biological significance of these empirical observations, we then used synthetic time series data with identical amplitude spectra, but randomized phase to show that similar effects can still appear even if the timing relationships between voxels are randomized. This implies that observed correlation fluctuations could occur between regions with distinct amplitude spectra, whether or not there are dynamic changes in neural connectivity between such regions. As more studies of brain connectivity dynamics appear, particularly studies using correlation as a key metric, it is vital to better distinguish true neural connectivity dynamics from connectivity fluctuations that are purely related to analysis methods [Handwerker et al., 2012 NeuroImage]

2. Spatial Distribution of Most/Least Stable Functional Connections at the scale of Minutes

In this project, we attempt to characterize the temporal variability of BOLD connectivity, and understand how it is spatially distributed across the brain. For this purpose, we scanned subjects continuously for 60 minutes, at a temporal resolution of 1 second, while they rested inside the scanner. We then compute connectivity matrices between functionally-defined regions of interest for non-overlapping 1 minute windows, and classify connections according to their strength, polarity, and variability across time. We find that the most stable connections correspond primarily to inter-hemispheric connections between left/right homologous ROIs. However, only 32% of all within-network connections are classified as most stable. This shows that resting stating networks have some long-term stability, but confirms the flexible configuration of these networks, particularly those related to higher order cognitive functions. Most variable connections correspond primarily to inter-hemispheric across-network connections between non-homologous regions in occipital and frontal cortex. Using the same dataset, we also evaluate how similarity of within-subject whole-brain connectivity matrices changes as a function of window duration (used here as a proxy for scan duration). Our results suggest scanning for a minimum of 10 minutes to optimize within-subject reproducibility of connectivity patterns across the entire brain, rather than for a few predefined networks. [Gonzalez-Castillo et al. 2014, Frontiers in Neuroscience]

Functional connectivity (FC) patterns in functional MRI exhibit dynamic behavior on the scale of seconds, with rich spatiotemporal structure and limited sets of whole-brain, quasi-stable FC configurations (FC states) recurring across time and subjects. Based on previous evidence linking various aspects of cognition to group-level, minute-to-minute FC changes in localized connections, we hypothesized that whole-brain FC states may reflect the global, orchestrated dynamics of cognitive processing on the scale of seconds. To test this hypothesis, subjects were continuously scanned as they engaged in and transitioned between mental states dictated by tasks. FC states computed within windows as short as 22.5 s permitted robust tracking of cognition in single subjects with near perfect accuracy. Accuracy dropped markedly for subjects with the lowest task performance. Spatially restricting FC information decreased accuracy at short time scales, emphasizing the distributed nature of whole-brain FC dynamics, beyond univariate magnitude changes, as valuable markers of cognition.[Gonzalez-Castillo et al. 2015, PNAS]